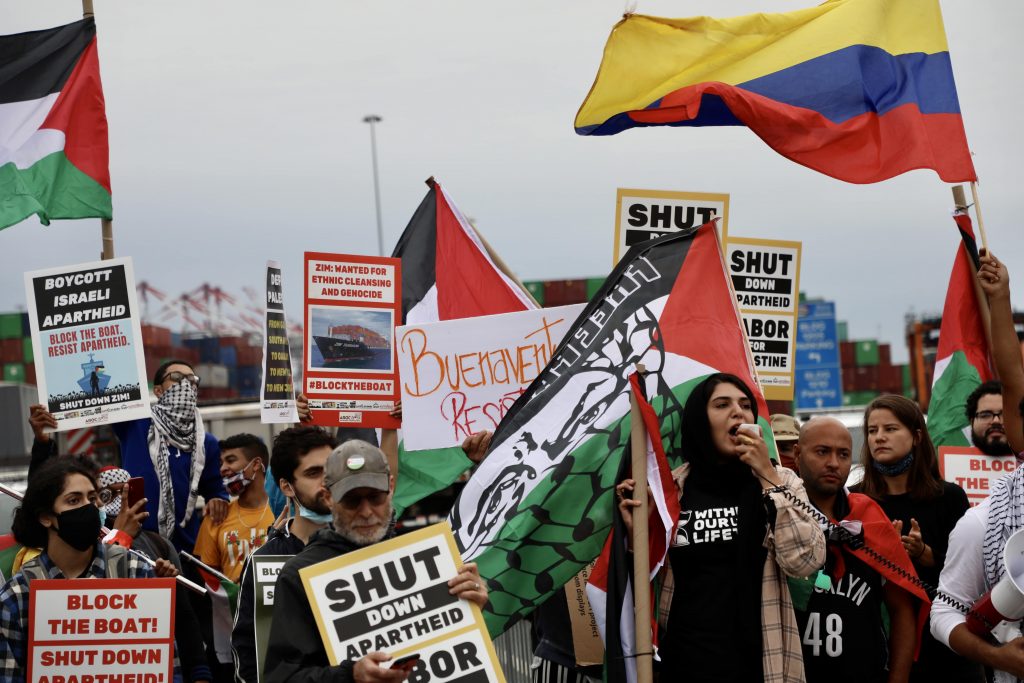 The event was organized by Block the Boat NY/NJ, the local affiliate of an international coalition of labor and human rights organizations fighting for justice in Palestine, led by the Arab Resource and Organizing Center in Oakland, California.

“We are sending a message that profiteering from Israeli apartheid and the ongoing violence against the Palestinian people will not be welcome in New York, New Jersey, or anywhere on the East Coast,” said Nerdeen Kiswani, Chair of Within Our Lifetime-United for Palestine. “Our communities are taking a stand against the ethnic cleansing, evictions, and bombings that Palestinians face every day.”

Chanting “Stand Up, Shut It Down, Turn that Boat Right Back Around”, “Injury to One, Injury to All! Tear Down Israel’s Apartheid Wall!”, and “When People Are Occupied, Resistance Is Justified!”, the picketers held colorful signs and banners as the dockworkers drove past them to begin their shift. A few honked in solidarity and many popped out their cameras to take video of the lively and spirited picket line.

The Zim Qingdao had docked shortly before the picketers arrived. In an attempt to avoid the protest, Zim had tried to hide the approach by removing the ship from the Maher Terminal’s shipping schedule. Although police blocked demonstrators from gaining access to the employee entrance, Zim was well aware of our presence. Zim refused to comment when asked by a reporter from the local National Public Radio station, which covered the event.

Actions like this one against ZIM are a response to a call from labor unions in Palestine urging workers and communities worldwide to refuse dealings with Israeli companies. The international #BlocktheBoat movement has received over 150 endorsements from labor unions, faith, and community organizations worldwide, including the Congress of South African Trade Unions (COSATU), the largest federation of trade unions in South Africa, representing 1.8 million people. Recent escalations of Israeli violence against Palestinians in Gaza, Jerusalem, and the West Bank have prompted thousands of demonstrations in cities across the world.

This mobilization follows months of successful actions on the North American West Coast, which prevented the unloading of ZIM-operated vessels in Oakland, Seattle, and Prince Rupert.

Over 8,000 people worldwide have signed up to answer the call to action at port cities around the world, as part of the BDS movement.

In Oakland, the ZIM-operated Volans was forced to disembark with its cargo in tow after being blocked from unloading for several weeks by a community picket. The same Volans ship eventually landed in Prince Rupert, B.C. After a public call to action, First Nation, Arab, and allied community members organized a picket to successfully block the ship from unloading for 5 days. In Seattle, Falastiniyat, a Palestinian feminist collective organized community pickets at Seattle’s port, successfully blocking ZIM San Diego ship from being unloaded for 4 days before a police crackdown forced the unloading of the vessel. Meanwhile, solidarity actions were held in Los Angeles, Vancouver, Houston, Detroit, Italy, and South Africa.

The San Francisco-based Arab Resource and Organizing Center first called on communities to block ZIM-operated ships in the U.S. in 2014, with the first successful #BlockTheBoat action Organizers have claimed the disruption of ZIM’s operations as a major victory for the international Boycott, Divestment, & Sanctions (BDS) movement, which works to put pressure on businesses profiting from Israeli apartheid.

The BDS movement has gained national prominence as a flashpoint in US politics as some legislatures attempt to criminalize the boycott movement. Several BDS campaigns globally, including #BlockTheBoat, have seen numerous successes over the past year, driven by plummeting public support for Israel in the wake of human rights abuses and ethnic cleansing of Palestinians.