Intersectional Palestine Organizing at CUNY and Beyond 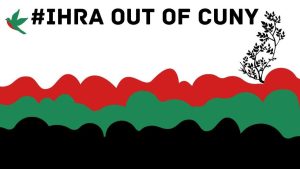 Last month, the New York Post reported that CUNY Chancellor Félix Matos Rodríguez, bowing to pressure from right-wing politicians (including some who masquerade as progressives), announced that CUNY would be adopting the IHRA definition of antisemitism. He did so without consultation of the larger CUNY community, and despite the fact that just a year earlier, the CUNY University Student Senate, the governing body of CUNY students system-wide, resisted similar right-wing pressure and voted to reject this definition. The USS, together with many human rights and civil liberties groups, noted that the definition represses and violates the right to free speech and political expression. More than that, the IHRA definition has a clear anti-Palestinian subtext—a subtext which has animated many overtly violent and racist attacks on our Palestinian students. And, as the Jewish Law Student Association wrote in a recent statement, “By conflating antisemitism with opposition to Israel’s settler-colonial ideology, not only are Palestinian voices silenced, but Jewish students are painted as a monolith, and the long and deep history of Jewish antizionism and Jewish dissent is erased.”Please join us for this virtual teach-in to hear from Fatima Mohammed and Rachel Pincus, CUNY Law School students who have been active in opposing the campaign of political repression behind the adoption of the IHRA definition, and to learn about opportunities for future organizing and mobilization for intersectionalist struggles at CUNY.

Register for this event here.