We are supporting this film discussion—watch the film at your convenience, and then join the discussion on Zoom.  Here is information from the Voices from the Holy Land’s flyer: 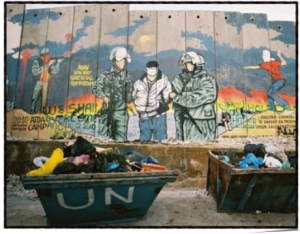 Does Israel’s treatment of Palestinians constitute a form of apartheid -the systematic segregation and discrimination of a population on the basis of race, first put into place in South Africa? Such is the claim of the United Nations, Amnesty International, B’Tselem, Human Rights Watch, and journalists from a range of media. The International Criminal Court has labeled apartheid “a crime against humanity”.  Two short documentary films explore the separate and distinct laws, physical infrastructure, civil systems and military enforcement applied to Palestinians in Israel and in the occupied territories. Israel’s newly elected right-wing government promises more extreme forms of discrimination, exclusion, and violence directed at Palestinian citizens of Israel and in the occupied territories. If this is apartheid, what is the authority of the UN and the ICC to adjudicate Israel’s violation of international law?

Saleh Hijazi is the Africa Campaigner at the National Committee of the Boycott, Divestment,  and Sanctions movement (BDS) and sits on the Steering Committee of the Pan-African Palestine Solidarity Network. Saleh was recently Deputy Regional Director for Middle East North Africa (MENA) at Amnesty International, leading the team producing “Israel’s Apartheid Against Palestinians: Cruel System of Domination and Crime Against Humanity”. He’s also worked with Human Rights Watch and the Al-Quds University Human Rights Clinic in Palestine. Saleh was born and raised in Jerusalem, Palestine.

Michael Lynk is Associate Professor at the Faculty of Law, Western University, London, Ontario, Canada. He served as Associate Dean of the Faculty between 2008-11. Professor Lynk teaches and writes in the areas of labour law, human rights law, and constitutional law. He also serves as a labour arbitrator and mediator. In May 2016, the United Nations Human Rights Council appointed Professor Lynkas Special Rapporteur for the human rights situation in the Palestinian territories (occupied since 1967) for a six-year term. In this capacity, he delivered regular reports to the UN General Assembly and the Human Rights Council on human rights trends in the OPT.

Edwin Arrison is an Anglican Priest, ordained by Archbishop Desmond Tutu in 1992. He is the Chairperson of the Centre for Christian Spirituality and the Development Officer for the Desmond and Leah Tutu Legacy Foundation in Cape Town. He is also the co-founder and Director of the Volmoed Youth Leadership Training Programme, in Western Cape, South Africa, of which Tutu was the patron. At the 30th anniversary of the 1985 Kairos document, it was resolved that new young leaders had to be nurtured to take forward the tradition of prophetic theology. VYLTP was founded the next year, on the 40th anniversary of the 1976 youth uprising in Soweto.

Jonathan Kuttab (moderator), a well-known international lawyer, is co-founder of the Palestinian human rights group Al-Haq, and co-founder of Nonviolence International. He serves on the Board of Bethlehem Bible College and is President of the Board of Holy Land Trust. Jonathan was the head of the Legal Committee negotiating the Cairo Agreement of 1994 between Israel and the PLO. He is author of the new book Beyond the Two-State Solution, in which he explains that the two-state solution is no longer viable and formulates a way forward for a one-state solution where Palestinians and Israelis can live together in a unified state.