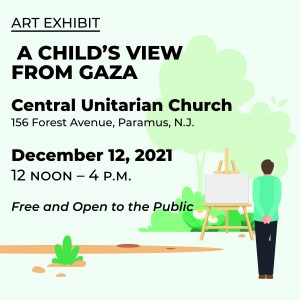 The pictures in the exhibit were drawn in art therapy classes by Palestinian children who survived the 2009 bombardment of Gaza during “Operation Cast Lead.” The classes were designed to help children cope with the devastating psychological effects of the Israeli attacks that killed their relatives and friends and demolished their homes and schools. In drawing after drawing you sense that a Palestinian child is baring their soul, in the hopes that the innocent truth of their experience will resonate with the soul of the beholder.

The pictures were supposed to be shown at the Museum of Children’s Art in Oakland, California in September 2011. Two weeks before the opening,  pressure was put on the museum to cancel the exhibit. In response, the organizers rented their own space and a travelling exhibit was born. In the last decade, thousands of people have seen these censored pictures of children who were victims of war.

This art exhibit has been made possible with the support of all its cosponsors:

The exhibit is free & open to the public.
Masks are required for this indoor exhibit.